Matt is back in New York, Kirsten is back in the picture, and they are both looking to get back at the Jester and the Sons of the Serpent. Also, Javier Rodríguez is back doing both pencils and colors (with Álvaro López on inks). I think that pretty much sums up this issue! Or not. Joking aside, what has made Daredevil so consistently amazing for almost two and a half years are all the little details, beats and character moments that make up each and every issue. This is true of Daredevil #34 as well, and I really enjoyed this month’s story.

I remember that one common complaint during the (also excellent) Brubaker/Lark run on Daredevil was that Daredevil was constantly put in a defensive position, attacked again and again, with little room to be proactive and mostly unaware of the devious plotting happening behind his back. While Mark Waid has made sure to keep Matt Murdock busy fighting off scheming villains – it really wouldn’t be much of a superhero comic book without them – this has also been nicely balanced with Matt often using the resources at his disposal to get the upper hand.

These resources have come in many forms, such as Daredevil relying on his long experience of the legal profession to talk his way out of a bind and secure the Omega drive. Most importantly, however, he has been able to use his large network of allies to his advantage. These have ranged from fellow heroes, such as regular guest-star Hank Pym, or Doctor Strange, to the “ordinary” people around him. A couple of issues back, Matt put Foggy to work in helping him look for clues to the occult past of the Sons of the Serpent, and this time around, it’s Kirsten’s turn to play superhero sidekick.

This, of course, entails Matt coming out of the proverbial closet and admitting to Kirsten that he and Daredevil are, of course, one and the same. Given that Kirsten has known this since issue one, it isn’t treated as a big deal, but it does suggest a potentially important shift in their relationship. While Matt has historically been bad about keeping his secret for very long around the women in his life, it does still signal that Matt now officially considers Kirsten someone who is a close enough friend (with benefits…) to officially share in the worst kept secret in the Marvel Universe. He comes clean to her following a very public display of his abilities (something he’s done before and which I will have reason to return to). He then asks for her help.

The second half of the issue sees the two of them put their elaborate plan into action. Things don’t go exactly as planned when Kirsten starts going off script, but the end result is an interesting look at Kirsten’s character and why Matt would be naturally drawn to her. In delivering her speech (I won’t go into more detail than that for fear of spoiling the issue), Kirsten – or Mark Waid, really – manages a very broad appeal to decency and common sense that actually succeeds in not getting too caught up in petty politics and current events. If it initially struck you as preachy, go back and read it again. 😉 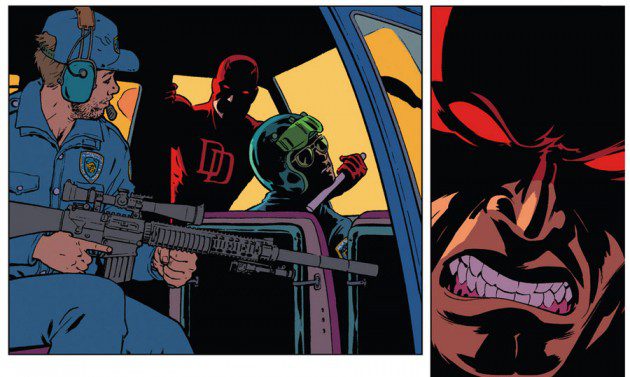 Just like regular penciller Chris Samnee, Javier Rodríguez is credited as co-storyteller, and the result is a great-looking and visually engaging story. I very much enjoyed Rodríguez’s previous outings, but I think he really outdid himself here. The colors, also his, look fantastic as well. I will admit to being a little perplexed by the look of Doctor Strange this issue, and the scene in which Matt is running backwards in the park (at least I think that’s what he’s doing) is a little hard to follow. Those minor complaints aside, however, this artwork is wonderful, full of personality and energy. I particularly like Rodríguez’s take on Kirsten, and the amount of detail going into the scenes of people from around the city. López’s inked lines are just a tiny shade lighter than what we usually see from Samnee, but the end product perfectly matches the overall look this book has had for a long time now. Spectacular work all around!

Okay, that’s it for now! I hope you guys enjoyed this issue too. Either way, please feel free to leave your comments below!