Review of Daredevil: End of Days #2

Hey gang! I’m really pressed for time these days so, on top of being a week late, this review is going to have to be a quick one. I did, however, want to get it out of the way before I go to the UK this Friday for the weekend-long Thought Bubble festival where I will make sure to pester both Mark Waid and Paolo Rivera. Naturally, you can all expect a full report! 😉

With that out of the way, let’s get on with the show. While I may often give Brian Michael Bendis a hard time about his (in my opinion) over-the-top senses writing or his less than impressive handling of Daredevil in the New Avengers, there should be no doubting my generally strong approval of his time at helm of the Daredevil title a few years back. Many of my absolute favorite Daredevil scenes are from the Bendis/Maleev run. I liked its strong focus on Matt’s humanity, dry sense of humor in the face of adversity, and Bendis’s writing of Foggy Nelson was nothing short of superb. He did more to elevate Foggy to competent lawyer status than any writer before him and really made his friendship with Matt seem genuine.

Daredevil: End of Days #2, written by Brian Bendis and David Mack, reminds us of many of the things that made Bendis’s previous work stand out. One of the strengths of the series so far is allowing Ben Urich to be the narrator and central character of the story. Bendis used to write a great Ben Urich, and ably assisted by David Mack, he certainly hasn’t lost his touch here. The two really get the character, and the mystery he is presented with provides enough reason for Urich’s trek across town in search of people who knew Matt, ghosts in some cases. For the most part, this issue holds up well, and the art by Klaus Janson is very strong and very successful in capturing the slightly dystopic atmosphere of this not too distant future. 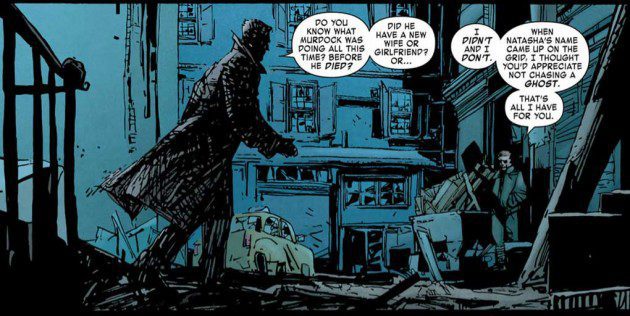 But… (Yeah, you knew there was a “but” coming, didn’t you) there are aspects of this story that don’t quite sit right with me. While I’m more than happy to see this story of a possible future as something that doesn’t adhere to main continuity – in fact I prefer the alternate universe approach – it does seem almost too much like a flashback to when Bendis left the book with little indication that anything worth noting happened after that. There’s nothing wrong with that per se, but it’s a bit jarring. Milla’s past(?) madness is not mentioned or even hinted at, and the fact that she’s got a red-headed son, that we’re probably supposed to assume is Matt’s son. Then again, he might only exist as a reason for Milla to slap Ben across the face. Speaking of jarring, I also must admit that it almost took me out of the book to see her portrayed as sighted. It may seem like I’m nitpicking, but it’s a very strange and completely unnecessary oversight that makes me wonder whether the otherwise spectacular Janson missed a memo or something.

At the end of the day, this is still an enjoyable story with a strong concept, but I do have my reservations going forward. The next couple of issues will decide whether I’ll continue to appreciate the world these creators have built or whether I’ll find myself with more reasons to be ever so slightly perturbed.