With Punisher #10, the Omega Effect story shifted from planning mode to action mode, making for a less complicated read than last week’s Avenging Spider-Man #6, but every bit as enjoyable. This issue is also very funny, with Spider-Man supplying enough one-liners to make me chuckle out loud more than once, especially in his scenes with the Punisher.

The beginning of the issue sees Frank Castle and Rachael Cole-Alves silently prepare for duty, presented in parallel with Daredevil and Spider-Man doing the same. The difference between the two teams is striking. While the Punisher and his new female side-kick silently get ready to go to war, Daredevil and Spider-Man trade quips and even stop to deliver a baby. It’s a scene that initially struck me as being over the top until I realized that it’s really an ingenious way of showing the differences between someone like Matt compared to someone like Frank. The former is really all about helping people, whatever that might entail, and he never loses sight of that (no pun intended). Frank, on the other hand, is solely focused on his objective, an objective that is really all about him and his own personal need for vengeance, and much less about other people. (And, in case you thought this was the first time Matt delivered a baby, you’d be wrong.)

Next, all four rendez-vous before going into action. Daredevil takes the time to try to reach out to Cole, which – as we’re about to find out – is a futile mission. Spider-Man has about as much success in trying to appeal to Punisher’s softer side. The second half of the issue is all action and ends with a delightful and twisted cliff-hanger that is just what this event needed going into the final issue with next week’s Daredevil #11.

This is a dynamic and perfectly paced issue that does a great job of respecting all of the characters’ individual personalities, traits and conversational styles. Again, the art is fantastic. Marco Checchetto’s characters have great proportions and show a variety of poses that look perfectly natural. He has a real knack for action as well as quieter moments and I really dig the way he draws superhero costumes in a way that makes them look like real garments with seams and folds. I also want to give two thumbs up to Matt Hollingsworth’s colors that set the perfect tone for the various indoor and outdoor nighttime environments. 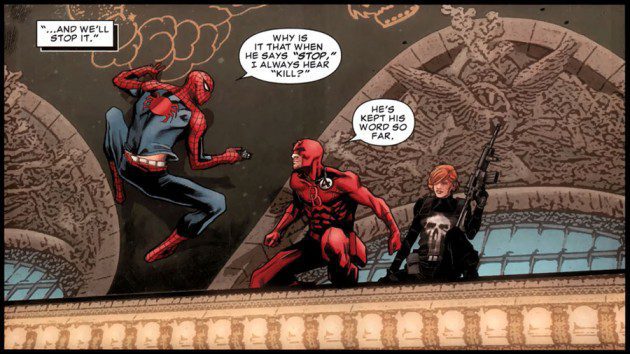 I’m really excited for next week’s Daredevil and am very happy about the turn this issue takes at the very end. While last week’s Avenging Spider-Man #6 was a good start (even amid the confusion), this issue gets us firmly on track with all readers comfortably onboard. More, please! 🙂