Daredevil #10 is another great issue by Mark Waid, Paolo Rivera and the rest of the team. The pacing on this book continues to be pitch perfect and and every single issue amazes me by offering so much story progression – on several fronts – without sacrificing any of the depth.

While you know that each issue is going to be great, that tends to be the only thing you know. Sure, we all knew Daredevil was going to escape almost being swallowed whole (and not just from checking out the previews), but nothing else in this issue happens the way you expect. While Daredevil and Mole Man come to blows in a wonderfully choreographed duel that sees the seemingly ungraceful subterranean bounce around like an over-sized Yoda, they also seem to switch roles in a surprising yet revealing manner.

We come into this issue already guessing that Mole Man must be a mad man to steal a bunch of coffins just to get his hands on the corpse of a long lost love. While we don’t walk away from this story ready to give him a clean bill of mental health, Mole Man is not as delusional as one would have guessed. There is no magic potion or other outlandish plan to bring her back and as the issue progresses, it is Daredevil who is shown as the one who has the biggest problem letting go of the past. 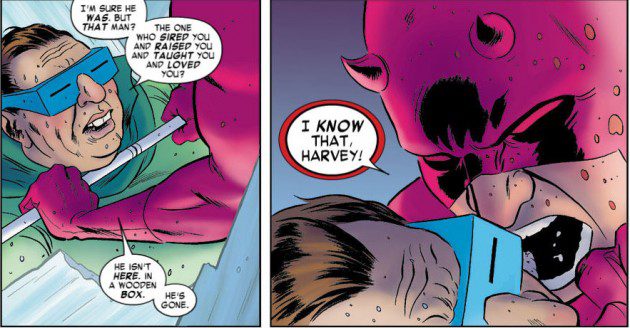 With this issue, one of the many wounds of Matt’s past is torn open and the lack of complete closure from his encounter with Mole Man, as well as the pressure he is under with the Omega Drive in his possession (we get to see in this issue just what the Black Cat decided to do with it) combine to make him sufficiently on edge to cause Foggy to start worrying. The façade has indeed started to crack, but Waid doesn’t go overboard with this development which feels completely organic and in line with how Daredevil has been written up to this point. This is, on the whole, an issue which feels sad, morbid and whimsical at the same time. Those are not the kinds of adjectives you usually find anywhere near each other, but the story covers all of these bases and more. 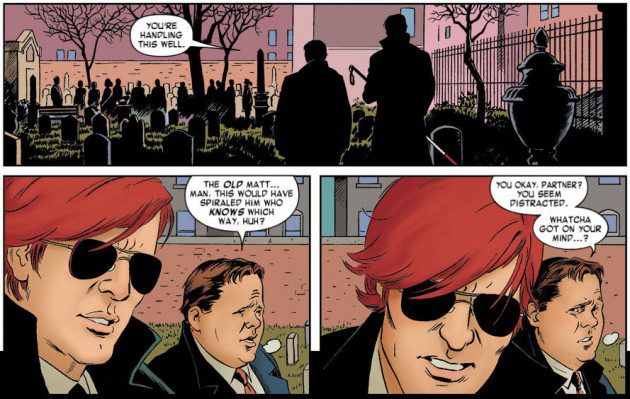 The art just keeps getting better and better. Paolo Rivera’s panel work is pure genius, starting out strong on the very first page as Daredevil falls into the maw and each of his impressions are framed according to the receiving sense. The fight scene is gorgeous, the emotional expressions of the characters faces are spot on, and details like having their brief affair told in the reflection of Matt’s window as he reads a note from the Black Cat push the artwork into a class of its own. Joe Rivera’s excellent inks play a vital part in making the underworld look just right and Javier Rodríguez’s colors are amazing as always. It’s understandable that Mole Man would expect Daredevil to be blinded by the bright gem stones, the color was intense enough to almost make mine tear up. 😉

I could not be happier with this book right now. It’s exciting, beautiful and combines the exotic superhero elements with the human drama in a way that makes the reader deeply invested in the story and all characters involved.