I’ll admit it. I’ve put off writing this review. My procrastination tendencies are obvious since I just spent two and a half hours vacuuming a one bedroom apartment (I have two furry cats, but still) before forcing myself to sit down and write this.

So, what’s the problem you ask? Well, as you all know, I was less than enthusiastic when I heard that Daredevil was going to join the New Avengers. At the same time, I was also less than enthusiastic to see Brian Michael Bendis – whose own run on the character was top-notch, no doubt about that – write Daredevil again. I haven’t been thrilled with what I’ve read of Bendis’s work over the last couple of years (due in part to my worsening allergy to what is known throughout comic book fandom as “Bendis speak”).

This doesn’t mean that I’m suggesting that Brian Michael Bendis is a bad writer – he’s not – or that Daredevil joining the Avengers is just a terrible idea. What it does mean, however, is that I’m not the best person to review this comic since I’m approaching this issue with so many prejudices that I simply can’t do it fairly. If I didn’t run a Daredevil site, where this review is more or less expected of me, I wouldn’t be writing it. To be clear, I didn’t dislike New Avengers #16. I even think it had some nice scenes in it. I’m just not any more enthusiastic now than I was before reading it about Daredevil joining the Avengers.

So, with this lengthy disclaimer (at least I think that’s what it was) out of the way, let’s get to the issue itself.

The entire issue is told in backflashes, framed by a scene of the various members of the team narrating the events in the present. During their conversation, the theme of who deserves to be an Avenger or what being an Avenger really means forms the common thread. I do like the idea of this, though I feel the delivery could have been a bit smoother. It reads more like people making overly self-aware statements than a natural conversation.

Daredevil spends most of the issue fighting the nasty Nazi robots introduced by the Fear Itself event against which this story is set. When he sees the Avengers Tower fall to the ground, he realizes that the Avengers Mansion is also in danger and that Luke and Jessica’s baby girl Danielle might be there even though her parents are not. Acting on this impulse, he rushes to save the baby and their nanny Squirrel Girl. I like the more human direction that this story takes when Matt saves the baby and how this provides the impetus for Luke to offer him membership in the Avengers.

What I’m not so thrilled about is the magnitude of the fight against the robots which sees Daredevil jump around and control the scene on his own in a way that I don’t think fits any relatively low-powered character. Though I know lots of fans loved seeing Matt go up against what looked like dozens of Yakuza during Bendis’s Daredevil run, I’m more skeptical of his efforts to bring home just how “bad ass” Daredevil is by exaggerating (in my opinion) his abilities, whether as a fighter or in the ways Daredevil’s senses are used. I think there are better ways to show off Daredevil’s skill set without going over the top. 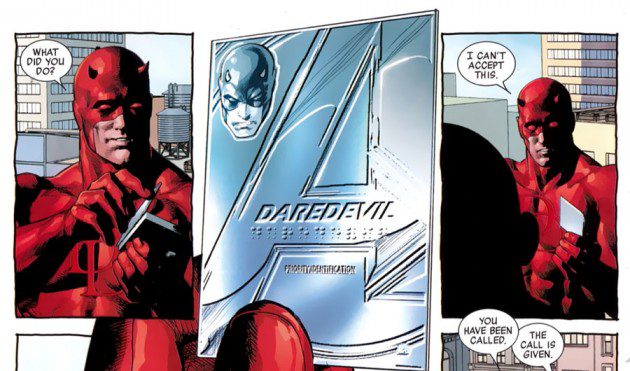 The scene in which Daredevil meets with Luke and Jessica and receives his Avengers card is probably my favorite. It feels genuine and relatable and it handles the aftermath of Shadowland well. This is one past plot thread that I’d rather see handled in the New Avengers than in Daredevil because it makes sense for Matt to work this through together with his super-powered allies.

The art by Mike Deodato is generally pretty good and easy to follow and he handles the big splash pages well. However, there are some scenes where the poses look a little odd and I personally prefer a slightly leaner look for Daredevil.

All in all, this is an okay issue of New Avengers (and certainly better than the ones that made me drop the title a few issues back) which provides a logical way for Daredevil to make his way back into his superhero family, but I’m not yet feeling any real enthusiasm for this new direction in Daredevil’s life. We’ll have to see if Bendis will be able to convince me otherwise in the months to come.