For anyone who’s beginning to see a pattern, you’re not imagining things. We’ll be looking at lots of different things related to Shadowland in the weeks ahead because there are many angles to explore. Last week, the solicits for September were released, revealing quite a few things about who we might find on Matt’s side.

In the next few days, I’ll try to cover the more speculative aspects of what we might see happen down the line. For now, let’s take a brief look at one of the more noticeable changes we’ll be seeing in next month’s Daredevil: The new costume!” 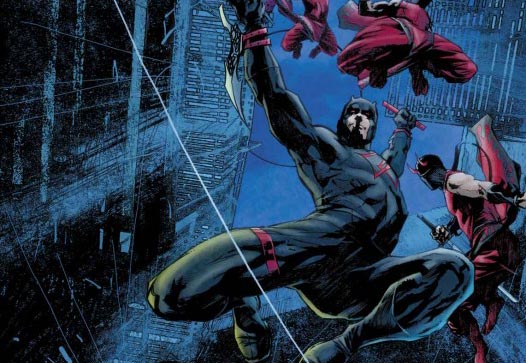 The image above is from the unlettered sneak peak of Daredevil #508 that was released last Thursday and gives us the first “in comic” appearance of the new black costume that had previously been hinted at in one of the teasers (below on the right, click to zoom) released previously. 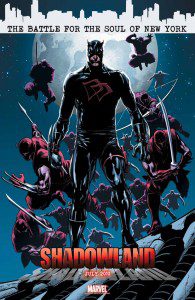 A few things stand out right away. First of all, we see the addition of a couple of seriously scary-looking blades – though I must admit that they also look pretty dangerous to the person wearing them. The preview art above shows only one blade, and I suspect that they are intended more as a tool for intimidation than as actual weapons. Not that the new and darker Daredevil doesn’t have it in him, but these blades don’t look very practical.

Secondly, the costume still contains a bit of red, as an accent color. The famous double ‘D’s look a little edgier and a little rougher (did Matt draw those himself? ;)) but are still red, and match the billy club holster. There’s been some speculation on Daredevil’s red eyes, but one thing to remember is that the mask he usually wears also has red lenses, even though they don’t come across as quite as striking, and it doesn’t necessarily mean anything.

So, what do you guys think of the new costume? I quite like the look of it myself, and the preview art from Daredevil #508 is absolutely beautiful. The only thing missing is a slight bulge where a man usually carries his “package.” I’m getting a slight Ken doll vibe from that particular shot. Every girl knows that black is slimming, but that is pure magic…

For historical comparison, and for your viewing pleasure, here’s a list of Daredevil’s lesser-known previous costumes. We have the old yellow costume, and the short-lived armored costume from the 90’s that, in an interesting coincidence, premiered during the Fall from Grace storyline which was the last time Daredevil encountered the Snakeroot.

Daredevil in his yellow costume, from Daredevil #1

Daredevil in his armored costume, from Daredevil #321