The Hand – The life and (first) death of Kirigi

Just like supposedly mortal comic book characters tend to die and refuse to stay dead, the same thing can apparently happen to supposedly immortal characters. This is the case for Kirigi, an enormous and powerful – though oddly quiet – ninja dating back to the introduction of the Hand.

After appearing at the very end of the last issue, Kirigi is introduced again below, in issue #175, in a scene which sees him killing three Hand ninjas with a single stroke. Their offense? Failing to kill Matt Murdock. I’ll tell you, if the punishment for slacking off at work was that severe at my office, I wouldn’t be writing this. 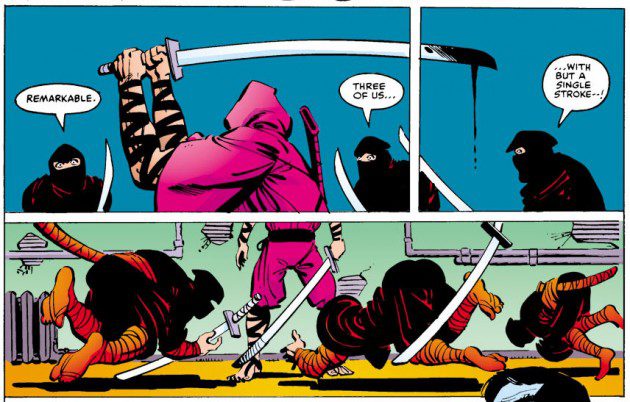 Kirigi kills three Hand ninjas with a single swing of his sword, Daredevil #175

I have to say that I find it quite funny how the three ninjas above show just how impressed they are with Kirigi’s swordsmanship even as they’re dying. Kirigi’s work isn’t over, however. His Jonin is standing by with a new job for him, to go after “the woman Elektra.” This leads to a cat and mouse game and a series of violent clashes that recur over the span of Daredevil #175 and 176. First, it is Elektra who finds Kirigi… Kirigi and Elektra face off, round 1, from Daredevil #175

After a strong first effort, Elektra finds that her sais may have lost their deadly sting. Kirigi is shown to be an impossibly strong foe and virtually impossible to kill. Elektra sees the tables turn on her, and is soon at Kirigi’s mercy. And if we are to believe Miller’s own words, she is right to be afraid:

“Huddled about their campfires, master warriors of old Japan spoke fearfully of the ninja, who seemed possessed with mystic ways of dealing death. But the ninja knew a terror all their own. They would shudder and grasp their swordhilts, and the long night would pass without sleep — if they heard a single name… Kirigi!”

There you have it, Kirigi is the boogie man that ninja parents use to scare their ninja kids. 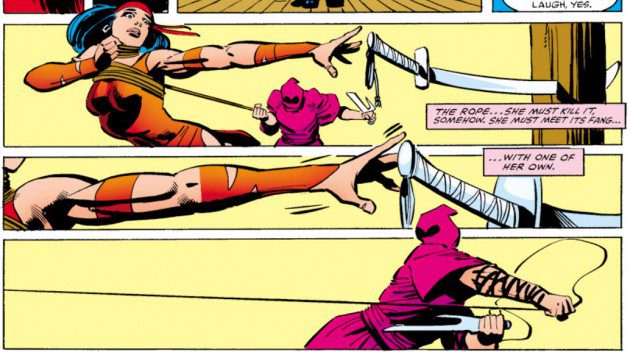 Kirigi has Elektra by the neck, Daredevil #175

Luckily for Elektra, she is pretty badass herself. Thrusting Kirigi’s sword through his body and throwing him down the stairs should do the trick. Emphasis on “should.” 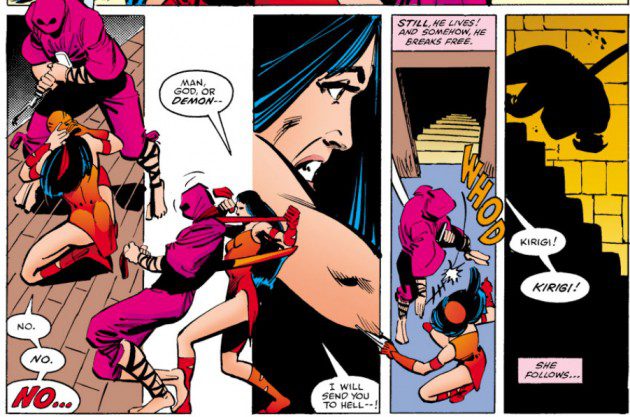 If you’re wondering where Matt is through all of this, he is busy fighting off the other ninjas which have invaded his life and those of his friends while battling the side effects of the Hand’s earlier assassination attempt: the loss of his radar sense.

By next issue, Kirigi seems to have recovered. True, he is still walking around with a sword through his body, but that’s a mere paper cut to someone like Kirigi.

“He is Kirigi and his name is a legend that has been whispered by the dying and the doomed across the centuries since the feudal struggles of old Japan. Kirigi — the man-demon terror of even the boldest samurai… Kirigi — the assassin even the ninja feared… Kirigi — the immortal… True or not, he believes his legend. And that is enough, for now, to keep him alive…” 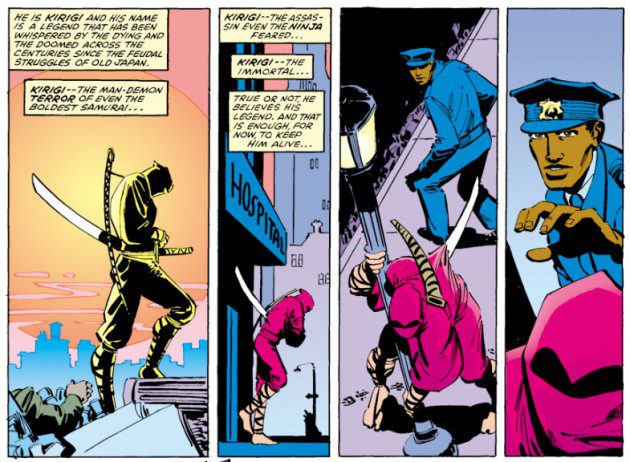 Kirigi is still alive, even with a sword through his body, from Daredevil #176

Seeking refuge in what appears to be a church, Kirigi pulls out the sword from his body and meditates himself back to health. He has to avenge the death of his Jonin, whom Elektra killed last issue (right after pushing Kirigi down the stairs). Their final encounter takes place after Kirigi has stalked Elektra for much of the issue and finally decides to go in for the kill.

After a lengthy fight, Elektra tries to do him in in a most unusual manner – for a ninja assassin at least – by getting behind the wheel of a truck and running Kirigi off a dock. However, Kirigi emerges again looking like the Human Torch. 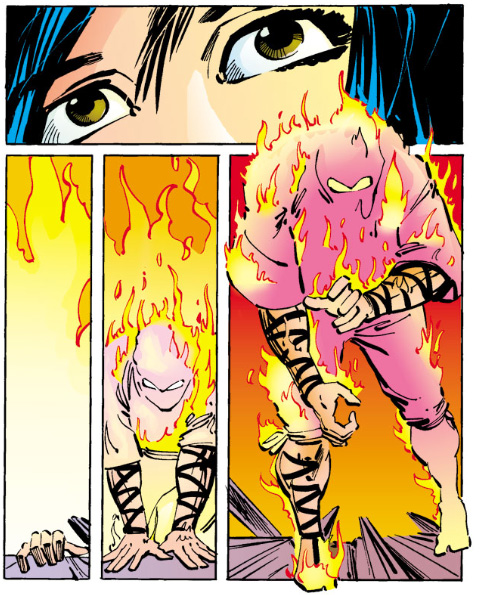 Having tried the sword through body, pushing down stairs and vehicular homicide approaches, a frustrated Elektra finally puts and end to Kirigi’s annoying unwillingness to die, by unceremoniously chopping his head off. And if you’re wondering why I’m not showing you that panel it’s because the decapitation may have been a little too extreme for Marvel, as it happens off-panel.

As for Kirigi, he won’t stay dead for long. In another dozen issues, he’ll be fit for fight once again. But that’s for another post.