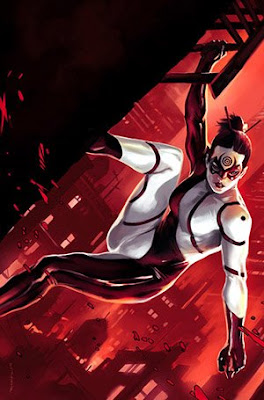 Well, the news is out on a new villain for Daredevil who will make her debut in Daredevil #111, which is due out in September. From the discussion following the original Brubaker interview about the character on Newsarama and elsewhere, I think it’s safe to say that fans seem split down the middle when it comes to the basic premise. At this point I’m not sure the character specifically appeals to me, and she does have some mighty gimmicky baggage to overcome, but I still expect this to be an interesting character and that the story will be good. I expect it because it’s what I’ve come to expect from Ed Brubaker. Given his creativity, I’m interested to see where this goes and I’m also relieved to hear that she doesn’t have any kind of personal grudge against Matt. Maybe when he’s not busy fighting her, his friends could take him out for a beer or something.

UPDATED: Links to news on this story can also be found HERE (Marvel) and HERE (Comics Bulletin).

In other news…
Unless you’re here for the first time, you may have noticed that I’ve done some work on the site. The post area is wider, which makes it easier to post larger pictures so people can actually read the panels. The font is also a little bigger and I’ve cleaned up a lot of the sidebar content and made a separate archive page. While it might be easier to find earlier posts by having the links on the front page, a separate archive page allows for a brief summary of each post which is ultimately a little more informative, especially with the number of posts going up. I also intend to add more content of a “non-post” nature that will appear on a separate page as well.

Later today, I’ll post my review of Daredevil #107. I really liked it a lot, but more on that when I get to it. Have a good one everyone!